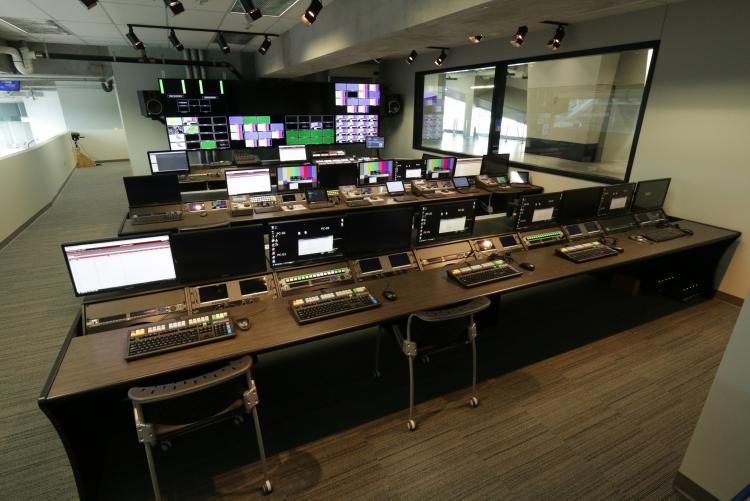 Opened in 2016, US Bank Stadium is a state-of-the-art, multi-purpose stadium located in downtown Minneapolis. “The Ship” is the new home of the Minnesota Vikings and host to future events such as Super Bowl LII in February 2018, the 2019 NCAA Final Four, and the ESPN X Games in 2017 and 2018. An ultramodern stadium required a video control room to match. The Minnesota Vikings enlisted the help of Alpha Video to make their vision come to life.

With the opening of a contemporary new stadium, the Minnesota Vikings wanted a top-of-the-line video control room that would allow them to produce dynamic visual content Minnesota fans have never seen before. The fans were the number one priority and the room had to provide an “intimate experience,” says Bryan Harper, Vice President of Content & Production. Having the fans feel they are an extension of the team was vital. “We knew it was going to be a great experience, but we were going to define what ‘great’ was.”

Another key aspect of the control room was to ensure it was 4K-ready. The Vikings are currently building a new headquarters in Eagan and need to be able to quickly capture and send content—both 1080p and 4K—back and forth between locations during games.

Looking into the lower bowl of the stadium, the transition from video board to fan is seamless. For that reason, the Vikings wanted to focus on having all main content use a 16:9 aspect ratio, a new visual experience for Minnesota fans.

Finally, having everyone in the same room was important to the team and a major goal in the project. Having the production crew all operating in the same general vicinity for more effective communication and workflow was essential.

The design of the room was tailored to the fans. “We put windows that look into the control room area, giving them a little glimpse behind the curtain,” says Harper. In addition, the room was made large enough to accommodate all content staff during games and events, something the Vikings made clear on their wish list from the beginning of the project.

4K feeds are delivered to the Viking’s master control room with a Ross Acuity video switcher and Evertz EQX router. The control room is also equipped with four EVS XT3 instant replay stations—three in 1080p and one in 4K. All four can access, record, and playback content sourced from the stadium’s 18 Sony cameras.

To quickly edit live content, EVS MultiReview was installed to empower producers and operators to create better live replays. MultiReview gives synchronous access to all cameras and truck feeds from one simple interface. For production content management, the EVS IPDirector provides flexible and expandable production tools for every user and was built to meet the demands of live production. IPDirector allows Vikings staff to quickly and easily send content back and forth between the control room at US Bank Stadium and the Vikings new training facility located in Eagan, Minnesota.

Alpha Video installed a remotely-controlled Sony PMW-F55 with a pan-tilt-zoom head at the 50-yard line. From this position, the Vikings’ production staff—and by extension, TV viewers—can see what is happening anywhere on the field in 4K clarity. The other eight 4K cameras are Sony HDC-4300s, manned and mounted on Vinten tripods around the stadium. Meanwhile, the 1080p PTZ cameras are Sony SRG-300Hs and the 1080p wireless cameras are Sony PMW-X500s with VisLink transmitters.

Finally, William Sound’s “Hearing HotSpot” was leveraged as a system to allow social media staff and others with the Vikings and NFL to hear TV, radio, and public address announcements while working at their stations. This innovative listening technology allows any control room staff member to listen to any routed audio source with no delay on their cellphone or tablet via Wi-Fi.

After the inaugural season at US Bank Stadium, Vikings staff members could not be happier. Harper says fan reaction through the first year has been “off the charts” and staff feedback has been tremendous. “The players look to the fans and the fans look to us to drive the feeling of the building and with this room we’re able to do that,” says Allan Wertheimer, Senior Manager, Production. It was a “great fan experience in Year One.”

On working with Alpha Video, Harper said, “our experience with Alpha Video has been phenomenal. From the outset, they understood what our goals were and stayed on that path with us the whole way—looking out for us every opportunity that there was. That team-type mentality is one of the things that made this project so successful.”

“Working with Alpha Video has been exceptional,” added Tadd Wilson, Broadcast Operations Manager. “Alpha has been there every step of the way.”

About Alpha Video
Alpha Video is a national integrator of audiovisual and broadcast technologies that empower organizations to better communicate with their target audience. We design, integrate, and support solutions that improve visual communications, collaboration, and content creation. With our expertise in a variety of industries, we are able to combine best-in-class AV and broadcast technologies to create custom solutions to meet complex communications challenges.

A Word from Our Clients

From the initial conversation and exploration of options, down to the nuts and bolts of the installation, Alpha was beside us every step of the...

Working with Alpha Video has been exceptional. Alpha has been there every step of the way.

Working with the Alpha Video Creative motion graphic designers was a wonderful experience!

It has been a really wonderful experience working with Alpha Video. The whole process has been very efficient and effective. It’s been great!

Time and time again we come back to Alpha Video because we have such a good experience with them on projects.